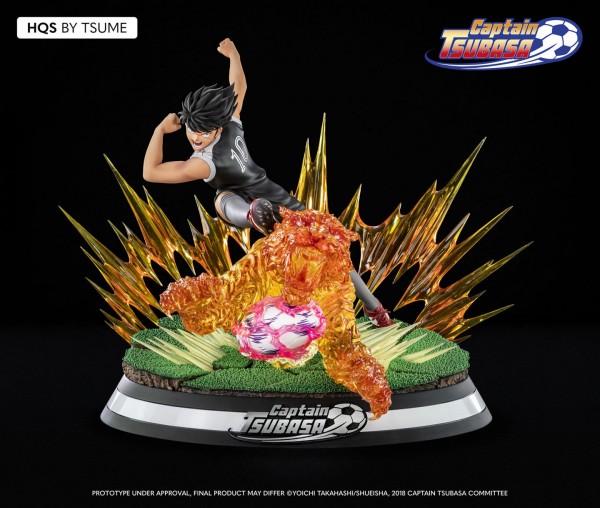 This HQS statue of Kojiro Hyuga highlights the flawless talent and determination of Tsubasa Ohzora's fiercest opponent. His difficult past taught him the sense of endeavour and forged his winning mentality! Today is the grand finale of the national championship: an epic duel between the Nankatsu of Tsubasa and the Toho of Hyuga, fighting both for their memorable victory!

At this pivotal moment of the match, on Nankatsu's side, Tsubasa no longer seems able to use his Drive Shot... And if in the opposing camp, Wakashimazu is handicapped by an old injury, Hyūga is meanwhile in full control of his craft! We can see him wearing his satin black and white number 10 jersey with Toho's badge, his sleeves rolled up over his shoulders as usual, as well as his gray socks and satin burgundy and white spiked shoes. Like his hair and uniform, the playmaker has a dark look and a determined expression. The conditions are met for him to score, he must absolutely seize this opportunity if he wants to emerge triumphant from this match… While Kisugi tries to slow his progression, Hyuga stops without flinching the tackle of the number 11 hitter, who is violently thrown backwards. In order to break Nankatsu's players running towards his direction just as a huge wave, Hyūga unleashes the immeasurable power of the tiger's shot with his right foot. The beast in transparent yellow, orange and red resin, emerges from his shot and jumps on his prey in the opposing goal, driving the victory ball in his mad rush. There is a LED at the base of the tiger to illuminate its the red aura as in the anime. The ferocious creature's eyes are white, devoid of color and pity, while its sharp teeth and claws are transparent. The purple lines hatched on the deformed balloon, as well as the energy film in pink transparent resin that surrounds it, reflect all the great power of the Tiger Shot. Similarly, the red lines at the corner of Hyuga's pupils testify to the energy he injects into his shot.

In a fraction of a second, his opponents are swept away, which is not surprising when we observe the shock waves in semi-transparent resin located at the point of impact. His shot has the same effect as an earthquake, as shown by the ground cracked by the incredible shock waves in yellow resin. We notice that the ground is dark and that the green of the lawn lightens towards the center to highlight the player and his phenomenal shot! The white line visible on the base recalls those drawn on the football field.

Shocked by the violence of this devastating shot, Morisaki, the Nankatsu’s goalkeeper, remains taped on the spot… It is a magnificent goal which is part of Nankatsu's nets and an amply deserved point which is added to the Tōhō’s score ! With such a strike, Hyuga leaves everyone dumbstruck and certainly makes his mark ! Back to the Tiger he was before, he will push Tsubasa to the limit in this legendary final, celebrating two great football champions in Japan, sharing a same passion and pronounced taste for competition!

If Hyuga wants to outdo everyone in football, it is mainly because he has to support his family. After his father died years ago, he became the man of the house at a very young age and worked as a newspaper and beer delivery boy to help his family to survive.

The statue comes with a numbered plate and a certificate of authenticity.