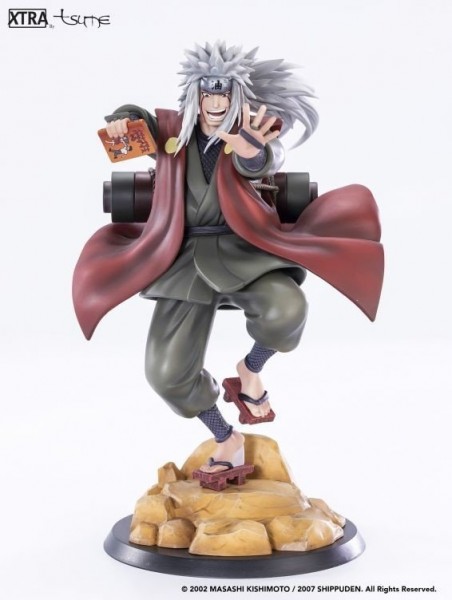 Here comes the legendary ninja in a kabuki pose, his left arm stretched out in front of him, balanced on his right leg bent on a heap of sand-colored rocks. His posture, like the cheerful expression we can see on his face, fits perfectly with his personality. Its metallic gray headband bears the kanji symbol "Abura", meaning "Oil", while a red line descends from each of his eyes like a teardrop.

His long graying white hair attached by an elastic band is in movement, just like his overcoat in dark red hues. Dressed in his mesh outfit, his khaki kimono, his black belt, as well as his geta, he looks nothing like a traditional ninja. He constantly carries with him the parchment allowing him to sign the pawn invocation pact, attached by two ropes to his shoulders.

Jiraya is carrying his orange-covered book "Icha Icha Paradise" in his right hand, the first book of his Icha Icha novels series, of which Kakashi remains the biggest fan.

Nicknamed the "Pervy Sage" by Naruto, because of his strong fondness for women, the ninja often justifies his vice as an inspiration for writing his stories; a hobby that brings him a lot of money that he always know how to spend...

Hanzo of the Salamander, the head of Amegakure, gave the nickname Sannin to the three legendary ninjas, Jiraya, Tsunade and Orochimaru, during the Second Shinobi World War. Deemed invincible, after a long fight he won against the trio, he recognized their value. From this recognition, he demanded that the latter bear the title of the Three Legendary Sannin.